My plan was to photograph Eliot Cutler—yes, that Eliot Cutler, the lawyer and businessman who almost became Maine’s governor in 2010—outside on an overcast, gloomy day in December.   I wanted it to be cold.  In fact, the colder the better.  I wanted a strong visual that captured the sense of a man, standing alone against the elements and the gathering storm.   For me, it was the perfect visual metaphor for a man who accepted defeat with class and then went on to found a political organization, OneMaine, dedicated to political reform here in Maine and beyond.

That was the plan, anyway.  Cutler was game and the stark location on Portland’s waterfront would work well.   After one cancellation (due to an actual storm, with strobe light-ruining rain), we rescheduled in December.  The weather turned out to be cold, but not bitterly so—as I’d hoped—but it was sufficiently overcast.  At least it was until Cutler actually stood in front of the camera.  That’s when the clouds slid away from the sun and the somber mood turned a few shades lighter.

So I shot the portrait I’d planned, and then decided to turn the sun’s appearance to my advantage.  Combined with a tough, somewhat enigmatic expression from Cutler, the backlit portrait quickly became my favorite.   I briefly stepped back to grab a scener, complete with assistant Charlie Widdis, my fully-functioning human-powered light boom.   Easy, simple, and all due to a great subject with a bit of seat-of-the-pantsery.  As Charlie says, it’s our standard M.O.   Check out the story on Inspire Portland. 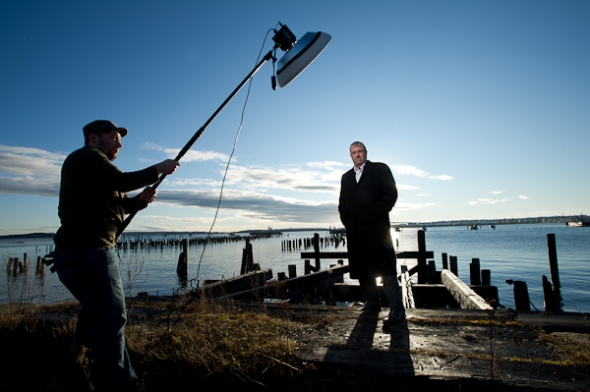 You’ve Hired Us. Now What? Behind the Scenes: Charlie Gets Mad Before hiring a photographer, interview yourself